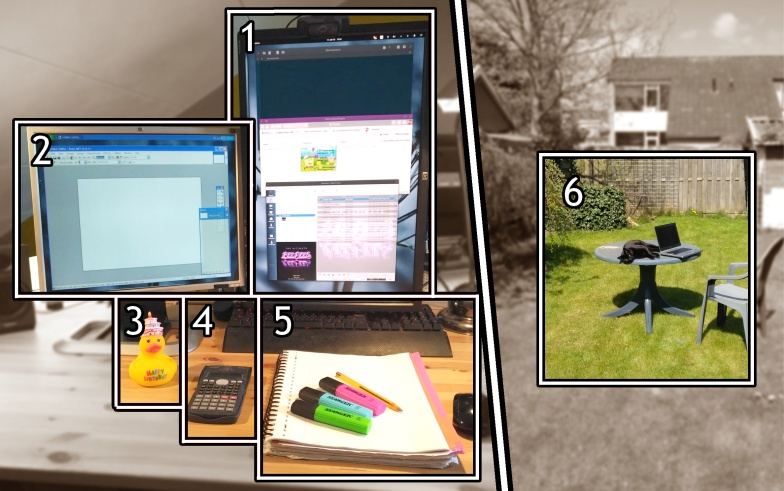 Alright everybody! In less than 10 hours the game jam will start! Most people are prepping their setup for a weekend full of designing, programming and (hopefully not) headaches. Let me show you around my workplace for this weekend. It is made pure for comfort. I numbered the most important stuff: 1: a system loaded with Elementary OS (a Linux system), a simple code-editor, Trello for tracking progress and a music library FULL OF Bee Gees (to stay in focus) 2: a virtual machine with Windows XP and Paint.NET. It is the only (advanced?) image-editor that is simple enough for me to wrap my head around ^^” 3: The rubber duck for the desperate moments when a self-inflicted bug just won’t die 4: a calculator for fast calculations 5: a note block, pen and markers for the idea’s (as you can tell now, I’m pretty old-fashioned in some ways) 6: a laptop (and our cat “Nova”), so we can catch some sunlight while I do some small stuff for the game-programming I wish everyone as much luck and fun in the world! I look forward for all the different creations after the weekend is over :D

Good evening everyone! Last year I joined Ludum Dare for the first time. I had lots of fun and made some friends along the way :-) The theme back then was "Stuck in a loop", I'm sure lots of you still remember that theme :p The whole process felt like the image I shared here haha. The game I made had some useful feedback though, I'll share the most noteworthy ones: - Add some background music if you have the time - Add a background to side-scrolling levels (don't leave it empty) - Make something special. Something that is interesting in some way. Not "just a game". - If something could be misinterpret as a bug, make sure it very clear it is not a bug ^^" - People liked the score system very much I won't use an engine, just javascript. I still don't like that language at all, but it's very fast to code and does the job well enough for me. I want the game to be playable inside almost every desktop browser. For the backend I'll use a combination of PHP and MySQL. The scoreboard in my previous game was received very well, so I'll do my best to integrate some sort of interaction between players again (e.g. a scoreboard, or some other approach). I have an extra personal limitation for this year's game. There has to be a king in my game! As I'm from the Netherlands and the submission day happens to be Kings day (Koningsdag) in the Netherlands. I thought it would be funny :P This year the theme will be revealed at 03:00AM Dutch time. Which is a bit crazy for me. My plan is to go to bed early and to wake up around 05:30AM. Then I can look at the theme and think about ideas while I eat some breakfast. Hopefully that will be enough to get the most awesome game-ideas known to mankind :D You can follow my progress here on the ludum dare website, or on my website: http://wouter52.com/?page=ld48