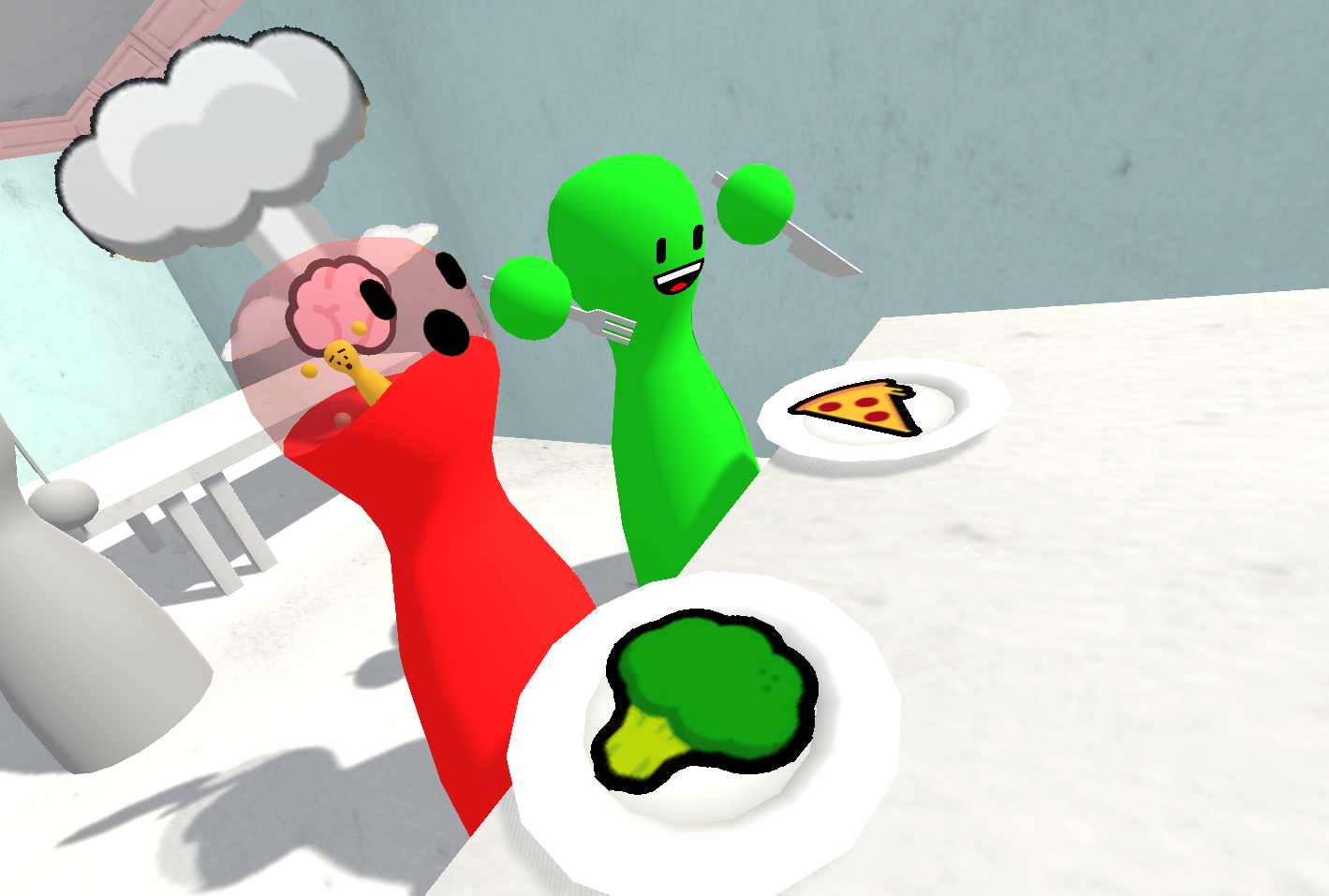 by Eretol cool concept, but severly lacking in feedback

by Ayced I fell out of my head smile cute graphics and audio, interesting perspective

by Wouter52 @eretol I agree, the feedback in this one is minimum. Your feedback, however: is appreciated! Thanks for playing smile

by Wouter52 @ayced haha! yeah, luckily a new one gets spawned in after falling out. There is no escape!! hahah laughing Thanks for the feedback! The perspective was lots of fun to create smile

by BangKerpow I really like the look. It sells the idea that you’re inside someone’s head really well. The audio was funny but as other have said feedback could certainly be better.

by mrchip Was kinda confused about what to do but this was promising! Aesthetics / vibe are on point. Wondering what this would have been like if it was finished as you intended… Oh well

by Deborah Messaoudene I love the graphic and the overall idea, a little bit hard to understand at first but the concept is super cool !

by Wouter52 @bangkerpow Thank you for the compliments! smiley @mrchip Thank you! THe result would have been a better balanced and more feedback providing experience with lots more chaos. We even had an idea to have multiple characters in the head with their own specialties interfering with each other. A bit like that pixar movie: inside out innocent @deborah-messaoudene Thank you smile

by kr4ft3r I actually feel frustrated that you didn’t get far with this, the idea along with graphical delivery is so cool. Characters and their faces are just adorable. Maybe you should point out in description that you can rotate around character with holding left mouse button.

by Wouter52 @kr4ft3r Thank you for the vicarious frustration! grin Sometimes it happens. We would have loved to finish it too, but the beauty is that one can only learn from his or her mistakes. And with a time preasure like this, mistakes will happen. This time the mistake was a too ambitious project. sweat_smile At least we have recognized some lessons. This was a fun experience for us. And having fun is the most important part. My friend made those graphics btw, I love those too! He did a great job! smile I added your suggestion to the descriptions. thumbsup

by rufson I hear this mouse inside my brain all the time bla bla bla… very cute models! do post jam

by Wouter52 @rufson haha I think everyone has the bla bla voice :P Thanks! I’ll talk to my teammate to see if a post jam version is do-able. We don’t have much time and for things like this we make room in our schedule ^^’

by Lenan Pretty cool concept, the movement is kinda weird since it doesn’t follow the camera angle. The graphics look clean and concise. The SFX were pretty fun but i feel like it would be better with some music to complement it. Overall a pretty interesting game.

by Wouter52 @lenan Thanks for your feedback! I agree that the movement is a bit basic, if we had more time we would have fixed that sweat_smile The music idea is a great idea! Maybe some kind of ‘elevator music’ would fit nicely innocent

by uinelj I really liked the angle you took here. The idea that you have is really good! It reminded me of Vice-versa in a way. Props to the amazing voice actor too!

by Jonathan Alderson Really cool projection from inside the head, it looks so cool. The resteraunt scene is nice, would be good to see it bigger on the screen. It’s a really nice demo : )

by Alexofp Its such a great concept, obviosly reminded me of the Inside Out movie. It could be easily expanded with different levels and more interactions, good job! The voice acting is funny

by Itzemii Wow!!!!!! Yes, as others wrote it feels a bit like “Inside Out”. But I never thought of it as a game. Cool idea. And very good implementation, very clear what is meant. And I like the “hohoho” of the guy at the other side. I think it is worth developing further.

by Wouter52 @uinelj thank you! I had to look up vice-versa, that is indeed one of our inspirations. In the Netherlands the movie is called Inside Out (: I’ll let the voice actors know you liked it :)

by Trexxak Such a neat concept! Loved the idea of the seperated gameworlds, seeing one only if you angle the guy correctly :D Though you didn’t finish, it’s easy to see where you were going with this game and I think the most crucial aspects are already working (i.e.: the core gameplay loop mirroring a human’s inner reaction in an abstract way). Really enjoyed playing this! Thank you a lot!

by Wouter52 @jonathan-alderson thank you! I think the screen could indeed be a bit bigger :) if we decide to continue the project, that will be one of the changes, thanks for the suggestion!

by Wouter52 @alexofp More levels! Pfoeh, that would be a challenge, but a fun one! Maybe in the next level the character is trying to impress his date or something, that would be chaos laughing

by Wouter52 @itzemii Thanks for the sincere compliment! I’ll check with my team mate if an expansion on the idea is possible (:

by Wouter52 @trexxak thank you! That is great that you understood where we wanted to go, we had lots of fun developing it :)

by Guilloteam Really interesting idea! The controls are a little confusing at the start but the concept is pretty neat; good job on this game!

by Wouter52 @guilloteam Thank you! I agree that the controls feel a bit janky sweat_smile

by CozyGamePals Hahah fun interpretation of the theme! I appreciate the voice acting, really adds to the silliness factor. I know you weren’t able to finish but great attempt, some great ideas in there!

by Wizard Really like the concept, graphic were nice and fairly easy to pick up.

by Wouter52 @cozygamepals Thank you! We had lots of fun doing the voice acting, we had lots more! Like chewing sounds and falling glass smile

by Wouter52 @wizard Thank you very much smiley

by topquark Great game idea, it reminded us of the movie Inside Out

by Wouter52 @topquark Thank you! Insideout was indeed one of our inspirations smile

by Thiago Nascimento I think it is very innovative, even for a not finished game

by TomasAquistapace Nice idea! I dont understand what to do at the first time, but after a couple of tries i understand and it’s funny and enjoyable! keep the good work!

by "Anonymous" The idea is a good one, but it was way to difficult to figure out what to do. Explaining a little more than just the controls would have been nice.

by pynl A neat approach to the emotional instability idea! Love the look of the game, and found the interactions to be pretty funny! Time restrictions aside, I think it would have helped to have added a quick tutorial at the start, asking the player to use space to interact with an orb, etc. After getting it figured out, though, it was a fun experience!

by Wouter5 @thiago-nascimento Thank you very much! @alex-chertilin Thank you! I agree, maybe we had to spend a little bit more time towards userfriendlyness next time ^^” @pynl Thankss! I agree, a tutorial would have helped significantly smile

by Bearacus I love that we’re the little consciousness inside our mind, and that we’re the ones pulling the string to keep out characters healthy! Love the concept would love to see it move developed and maybe something to fill the dark space around the head

by Wouter52 @bearacus Thank you! We did not think about the black background that much, maybe something non-distracting would be nice indeed :-)